“Yep, the doc says I need two more of those bad boys. And I had three last year… hope this is it… ”

Last week, when catching up with a former colleague, Jerry, he told me the he would be undergoing heart surgery in a few days.

Jerry is a 68-year-old emergency room doctor who’s spent the last five years in and out of the hospital with heart issues. He’s been diagnosed with coronary heart disease, high blood pressure (likely caused by the coronary heart disease) and high cholesterol. Plus, he’s had two heart attacks.

Jerry’s tried it all: statins, exercise, dietary changes, and has had three stents put in his arteries.

Next up, he will have two more stents put in his heart at his cardiologist’s urging.

What Jerry didn’t realize is that if he were taking a specific vitamin, his risk of coronary artery disease would decrease. We will discuss this heart-protective vitamin in just a bit.

First, let’s talk about stents, why they are dangerous and why Jerry’s cardiologist might be so keen to recommend them (hint: It involves money).

Stents are used in severe cases of coronary artery disease. They’re tiny implants used to widen arteries blocked with plaques made of fats and calcium. These deposits cause arterial stiffness, decrease blood flow and can lead to deadly heart attacks and strokes. 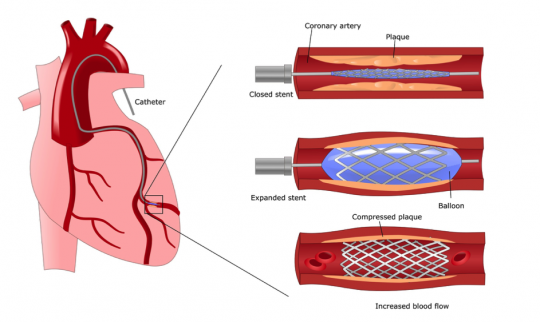 While stents can be effective at increasing blood flow to the heart, they require invasive surgery, are often implanted incorrectly and can lead to dangerous blood clots, blockages from scar tissue and even death. In fact, the overuse of stents causes death in at least 773 heart disease patients annually.

But what’s even worse — many times, stents are used in patients that truly don’t need them. According to David Brown, a cardiologist at Stony Brook University School of Medicine, two out of three elective stents are unnecessary.

So why would a cardiologist recommended such a dangerous and often unnecessary procedure?

In the last decade, cardiac stents have cost Americans over $110 billion.

To put this number in perspective, cardiologists can charge around $250 an hour to talk to a patient about stents and more than $1,000 to actually put one in. That might not sound like a crazy amount, but that can quickly add up if you look at the number of folks getting stents.

It’s estimated that over half of the 1.4 million stent procedures done in the U.S were on patients in stable condition. This means over 700,000 stents were used unnecessarily on healthy patients.

To be clear here, the other 700,000 stents implanted were needed. There are some cases in which a stent is the only option, though it’s only about half of the time it’s recommended.

If you ask me, this sound likes fraud — many healthy people are paying for a procedure they absolutely don’t need.

Fortunately, recent research shows there is a natural way to keep plaque out of your arteries, and it doesn’t require invasive surgery or cost you thousands of dollars.

Say Goodbye to Stents With K2

It’s vitamin K2, and it’s proving to be an essential part of heart health.

You may have heard in the past that vitamin K is good for your heart, but what you may not know is it’s specifically vitamin K2 that’s heart protective

After following 33,289 participants for almost 17 years, the researchers assessed the participants’ dietary intake of both vitamin K1 and vitamin K2. The scientists then correlated the data with the risk of coronary heart disease.

And what they found was astonishing…

Folks who had the highest intakes of vitamin K2 decreased their risk of dying from coronary heart disease by 14 percent!

When you consider how low the average intake of this heart-healthy vitamin is, it makes you wonder how much larger this percentage could be with supplementation or a diet rich in vitamin K2.

Vitamin K2 is so essential to heart health because it helps to draw artery-hardening calcium away from the heart and into the bones. This means taking vitamin K2 not only helps protect your arteries from stiffening mineral plaques, but also helps strengthen your bones.

But vitamin K2 works harder when taken with vitamin D3. You see, D3 helps signal your bones to absorb calcium and grow new bone tissue. So if you’re going to supplement with vitamin K2, be sure you’re also taking vitamin D3 as well. This combination will help keep your arteries clean as a whistle and give your bones steel-like strength.

Not to mention it may keep you from getting a costly, dangerous stent.